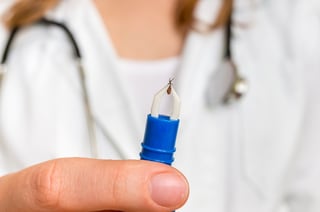 Lyme disease is not only evolving, but increasing dramatically in the United States. Especially in the Northeast.

New manifestations of Lyme's later stages and new post infectious sequelae are evolving. One of these is the arthritic symptoms associated with Lyme that can occur a few months to several years after infection.

Published in a recent issue of Arthritis and Rheumatology, doctors reported that systemic autoimminue joint diseases may follow Lyme infection.

"Genetics is the smoking gun, environment pulls the trigger." Lyme as well as other infections turn genes on. Did you know that CMV CytoMeglio Virus can trigger Rheumatoid Arthritis?

In a recent issue of Arthritis and Rheumatology, Dr. Steere and colleagues reported that systemic autoimmune joint diseases may follow Lyme infection.The team of doctors at Massachusetts General Hospital study patient records from over 13 years finding and identifying a group of patients with new-onset autoimmune joint disorder that developing a median of 4 months after Lyme disease infection, usually manifested by erthema migrans.

Dr. Steere pointed out, “The patients in the systemic autoimmune joint disorder group had often been treated with antibiotics for Stage 1 Lyme disease based on a presentation of erythema migrans, whereas the patients with Lyme arthritis had rarely presented with erythema migrans and had not been previously diagnosed or treated for Lyme disease.”
50 percent of people with Lyme do not have a bull's eye rash or any erythema migrans.

The need for different treatment approaches highlights the importance of distinguishing between 3 possibilities when patients present with frank joint swelling, in the context of Lyme disease -- Lyme arthritis (active B. burgdorferi infection in joints), post infectious Lyme arthritis (also known as antibiotic-refractory Lyme synovitis), and another form of inflammatory arthritis following Lyme disease.

The spirochetes create a biofilm which is antibiotic resistant over time from treatment.

Clues to the differential diagnosis in a patient with joint swelling, according to Dr. Steere:

Treatment of Lyme arthritis typically consists of a 28-day course of an oral antibiotic. “On the other hand, patients who have persistent proliferative synovitis, for months or years after that therapy (called post infectious antibiotic-refractory Lyme arthritis), and those with a post treatment new-onset systemic autoimmune disorder require anti-inflammatory treatment, usually DMARDs.”

No matter what your pathogen is named we are the first and only I.V. ozone therapy clinic in Rockland County. I.V. Ozone is safe and effective at eliminating viruses, bacterium and fungal infections. If you've tried everything else it's time to try Ozone! All treatments are MD ordered and FNP administered in NYS.