Why am I Always Tired? - Chronic Fatigue Syndrome - I.V. Ozone and I.V. Nutrients 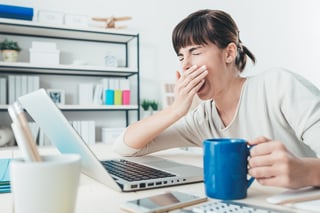 Could you be more than just tired?

According to the National Institute of Neurological Disorders and Stroke, about 40 million people in the United States suffer from chronic long-term sleep disorders each year and an additional 20 million people experience occasional sleep problems.

Patients with CFS show early immune signatures in plasma with prominent activation of both proinflammatory and anti-inflammatory chemical messengers called cytokines. This may serve as a potential biomarker for diagnosing the condition within 3 years of developing the illness.

Chronic fatigue syndrome is characterized by a profound fatigue lasting for over 6 months. It is often accompanied by loss of memory or concentration, sore throat, enlarged lymph nodes in the neck or underarms, unexplained muscle pain, or pain that moves from one joint to another without swelling or redness. The fatigue is typically worsened by activity but not improved with rest. A patient with  CFS may receive ample or excessive amounts of sleep with no restorative effects.

I run each patient through a battery of tests to find the root cause of fatigue. We rule out everything from cancer to viral, bacterial and fungal infections. We even look at comprehensive immune panels and check for mitochondrial damage.

Chronic Fatigue does not just go away. It is a serious condition that deserves serious treatment.

According to new criteria proposed by the IOM Committee on the Diagnostic Criteria for ME/CFS the 6 month duration criteria is essential for distinguishing CFS from other fatiguing disorders that may resolve in less than 6 month, these symptoms also are typically moderate to severe at least half of the time to be classified as CFS.

It is also not uncommon for children and adolescents to experience chronic fatigue syndrome, which can have effects on their social and educational development. It is even the most common cause of prolonged school absence.  It is suggested that they receive the same treatment as adults suffering CFS. Researchers state that pediatric evidence of this condition is much smaller than the adult evidence base, but sufficient enough to show that orthostatic intolerance and autonomic dysfunction are common in pediatric patients with ME/CFS and that the neurocognitive abnormalities—while not present at baseline when patients are tested in the supine position—will emerge when patients are tested under conditions of orthostatic stress or if another condition like distraction is introduced.   "According to researchers, there is a high prevalence of profound fatigue, unrefreshing sleep, and postexertional exacerbation of symptoms in children, just as there is in adults, and the evidence is strong that the condition can follow acute infectious mononucleosis or Epstein-Barr virus in some patients."

At Second Nature, we listen to you. We find the most effective and safe treatments to address your health problems.

Our CFS patients show these patterns and most have chronic Epstein-Barr virus amongst other viruses. They all have some level of leaky gut. Several have elevated heavy metals in tissue storage. Thousands of patients later - I start with correcting leaky gut, eliminating inflammatory foods, rebuilding the immune system, reducing viral loads and repairing mucosal membrane damage.

Do you have Sleep on the Brain?

How to Beat Cancer Fatigue and Chemo Clean Up